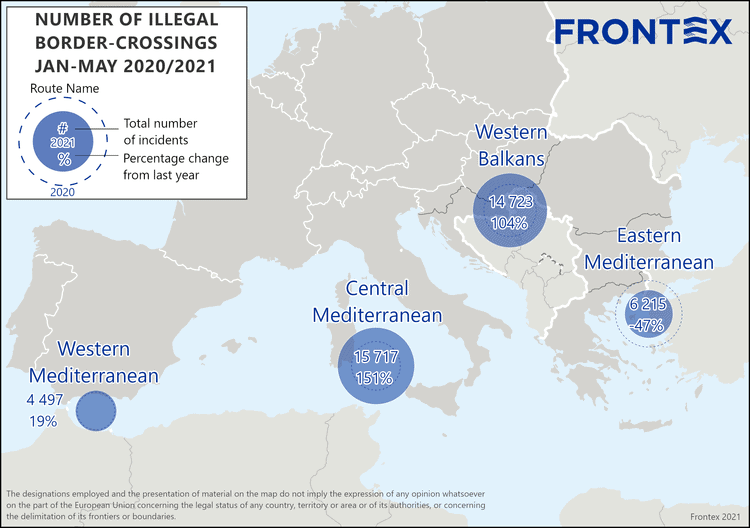 Illegal border crossings at Europe’s external borders increased 47% in 2021 since this time last year, according to a press release published by the European Border and Coast Guard Agency (FRONTEX).

The major drop in external border crossings is likely due to travel limitations due to Covid-19, according to the press release.

In the central Mediterranean, illegal crossings from January to May 2021 reached a total of over 15,700, more than doubling since the same time frame in 2020. Crossings more than doubled in the month of May 2021, rising to 4,200.

In the Western Mediterranean, nearly twice as many illegal border crossings were reported in May 2021 compared to May 2020. Crossings rose 21% from January-May 2020 to January-May 2021. Algerians and Moroccans made up most of these crossings.

For the Eastern Mediterranean, there was a 300% increase in crossings from May 2020 to May 2021. However, the number of crossings was halved in January to May 2021 compared to the same time period in 2020. Syrians and Turks made up most of these crossings.

For the Western Balkans, illegal crossings doubled in both the month of May and the span from January to May compared to the same time frame in 2020. Most detected nationals came from Syria and Afghanistan.

FRONTES notes that figured may ultimately be higher due to delayed reporting, and some figures may account for the same person crossing borders multiple times.