FRONTEX: Illegal Border Crossings Decrease Overall Since 2019, on the Rise Since April 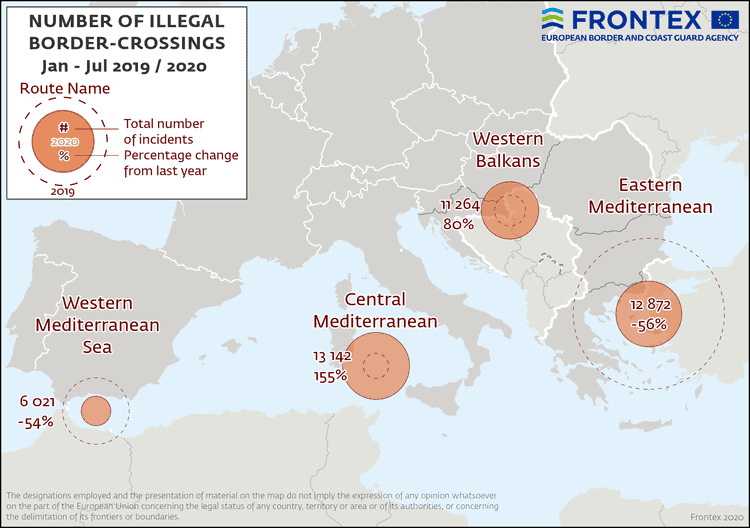 According to the report, overall illegal border crossings into Europe have decreased since July 2019.

“In the first seven months of this year, the number of illegal border crossings at Europe’s external borders fell by 15% from a year ago to 47 250*,” the report reads.

The total number of illegal border crossings hit record lows in April 2020. However, reports of border crossing incidents being reported have been on the rise since April.

“After reaching record lows in April due to restrictions related to COVID-19, the number of irregular migrants detected at Europe’s external borders had been rising over the last three months,” the report reads. It continued, “In July, the number of illegal border crossings rose by nearly a third from the previous month to 8650. The Central and Western Mediterranean regions saw twice as many arrivals as in June.”

According to the report, an unusual amount of illegal border crossings took place in the Central Mediterranean, rising 155% in the first 7 months of 2020. Tunisians and Bangladeshis made up the majority of illegal crossings.

In the Eastern Mediterranean, illegal crossings have fallen 44% since June 2020, and are down overall since July 2019. The largest number of detected immigrants were from Afghanistan and Syria.

The report also explained that the data presented in the statement refers to detections of irregular external border crossings. It further explains that some of the crossings detected could be from the same person being detected more than once in different locations, possibly leading to some inaccurate statistics.

“Note: The preliminary data presented in this statement refer to the number of detections of irregular border-crossing at the external borders of the European Union. The same person may attempt to cross the border several times in different locations at the external border,” the report explains.

The FRONTEX agency is responsible for border control at external EU/Schengen borders as well as coast guard operations off of EU/Schengen shores.