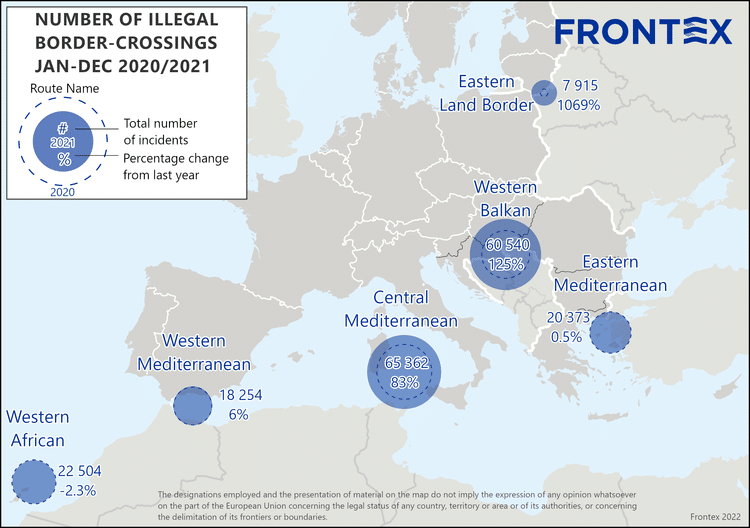 While legal travel into the EU and Schengen Area remains at extremely low levels, illegal migration into Europe have reached and exceeded pre-pandemic levels, according to an announcement published by the European Border Patrol and Coast Guard Agency, FRONTEX.

According to the announcement, there were nearly 200,000 illegal border crossings in 2021, which is the highest number since 2017.

“According to preliminary figures collected by Frontex, the total number of illegal border-crossings in 2021 was just short of 200 000, the highest number since 2017,” the announcement reads.

The increase in illegal border crossings constitutes a 36% increase over 2019 pre-pandemic levels, and a 57% increase over 2020, during the pandemic, according to FRONTEX’s data. The announcement then suggests that travel restrictions and lockdowns in Europe had something to do with the lower number of illegal crossings.

One of the main reasons for the increase in illegal crossings, however, was the situation at Poland’s external border with Belarus, where Belarus weaponized migrants in response to sanctions and other actions taken against the ruling Lukashenko regime.

“One such factor defining 2021 was undoubtedly the situation at the borders to Belarus, making it another year in which migration was used in a hybrid operation targeting the EU external border,” the announcement reads.

As a result of Belarus sending thousands of refugees to the EU’s external borders, many have made it through, and many others are stranded between the EU and Belarus in a massive humanitarian crisis.

Syrians were the most prevalent group reported in illegal crossings in 2021, followed by Tunisians, Moroccans, Algerians, and Afghans.

Women constituted 10% or less of arrivals, which is a large drop in number from 2019. The number of minors stayed largely the same.

According to the announcement, some illegal crossing routes saw dramatic increases from 2020 to 2021.

The Eastern land border, which includes the EU’s external borders with Belarus, saw a 1,069% increase in crossings.

The Western Balkan route saw an increase of 125%.

For more information about the migrant crisis at the external borders with Belarus, click this link.