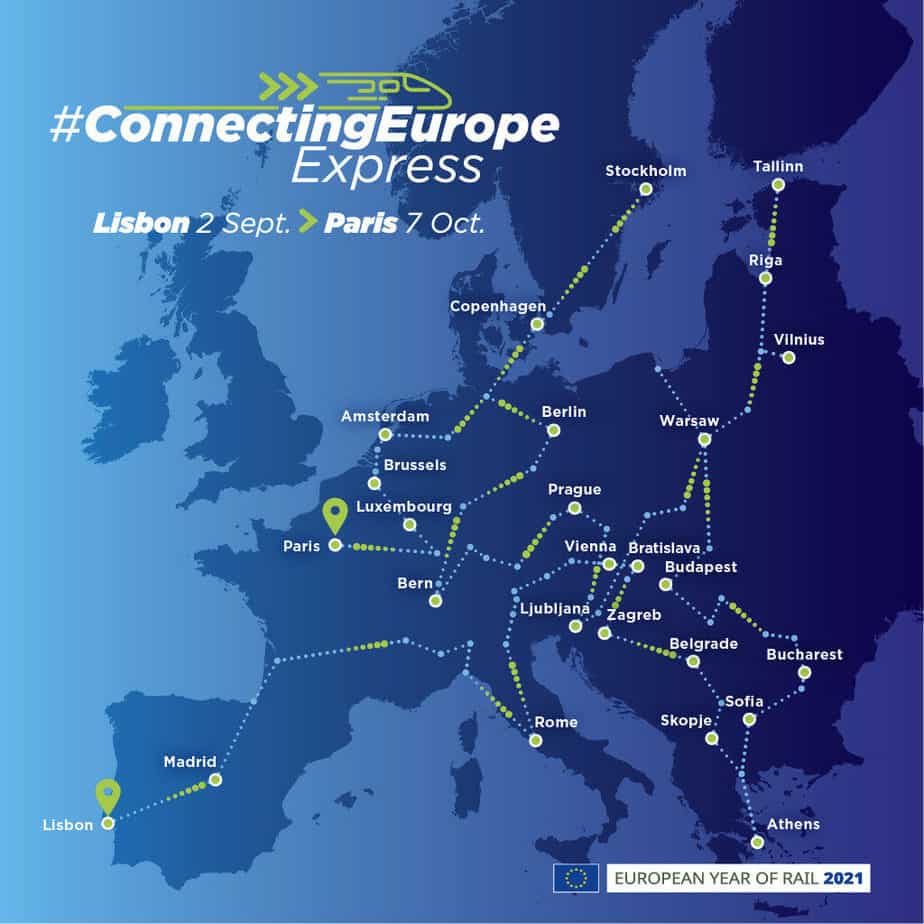 The official launch of the Connecting Europe Express rail line will begin in Autumn 2021, according to an announcement published by the European Commission’s Mobility and Transport Committee.

According to the announcement, the rail line will begin service on 2 September 2021 in Lisbon, Portugal, before ultimately reaching its final destination of Paris, France on 7 October 2021.

The Connecting Europe Express rail line will travel through 70 cities in 26 different countries, taking place over a total span of 36 days.

“Travelling through 26 European countries, the Connecting Europe Express is proof of the importance of the European Year of Rail. I thank all CER members for their involvement in this key project with the European Commission. In order to achieve our climate targets, we need to further strengthen the vitality of rail with more international long-distance passenger rail services and we must also consistently shift freight transport to rail,” said CER Chair and CEO of Austrian Federal Railways, Andreas Matha.

During each of the stops there will be events, adapted to Covid-19 precautions, that will highlight some of the cultural aspects of each city and country that the trains will stop in.

In addition, the new rail route serves as a symbol of European connectivity and cross-border cooperation, despite the challenges that railways face to attract more passengers and freight.

“Crisscrossing the continent, from Lisbon to Bucharest and from Berlin to Paris, the Connecting Europe Express will follow routes that bind us together – whether as countries, businesses or people. While a symbol for connectivity, this train also serves as a reminder that we still have a long way to go and much work to do before rail becomes the transport option of choice for Europeans. Welcome the Connecting Europe Express as it stops at a station near you and join the events taking place around the continent,” said Commissioner for Transport Adina Valean.

Due to the lack of interoperability of some countries’ rail systems, due largely to different-sized tracks, there will be three separate trains used on the route in order to allow them to complete the journey.

One train will run on the standard gauge for most of the journey. However, in Spain and Portugal, passengers will ride on a train fit for the Iberian gauge, and on a third train for the Baltic gauge in Estonia, Latvia, and Lithuania.

To read the Commission’s full announcement, click this link.

Travelers from several key international markets are still hesitant to travel to Europe, according to findings in a report published by the European Travel Commission